You may be familiar with the fairy tale about Sleeping Beauty and how time stood still while the castle was covered in growing dog roses? Almost the same thing happened in Åsens By.

People have lived and worked in Åsen since the Bronze Age. Old documents and maps refer to the village as far back as the 16th century.

Later in history, in the 18th and 19th centuries, the winds of change blew across the Swedish countryside. Factories were built in the towns and cities, and many people relocated in search of jobs and better living conditions. Others chose to leave Sweden to spread their wings in America. 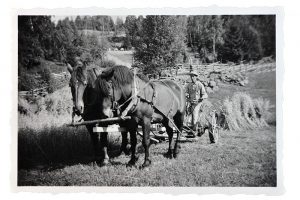 While urban populations grew, almost all food was still produced in the countryside, where a rapidly shrinking proportion of the population remained. To make agriculture more efficient, the Swedish government carried out two major reforms at the end of the 19th century. Land areas were merged into larger units, resulting in the type of agriculture we see today. Small fields and plots of land became a thing of the past.

This never happened in Åsens By. Why is a matter of debate, and perhaps we will never know the truth, but one thing is certain – farming here continued as it always had. The land continued to be farmed in the old way, with horses and manpower.

Many years later, when the last inhabitant of the village, Auntie Tekla, died in 1989, the landscape had begun to regrow and the houses were falling into disrepair. But then the prince, or rather a formal inventory, came to the rescue.

It was in the early 1990s that an inventory of cultural monuments in the area was carried out. The village of Åsen was categorised as a unique monument from a bygone era. There are only a few such places in Sweden. Slowly and with great care, work began to restore the houses to their original condition, and eventually the fields and pastures were cleared again. The village, which like Sleeping Beauty had lain dormant for so long, came to life again.